Air ionizers have become one of the more popular air purifiers recently. They use negative ions to ionize the air, removing harmful pollutants from it. However, many people have a lot of questions about ionized air, one of the most common one being “Why is ionized air good for you?”

In short, Ionized air is good for you because it is clean of all harmful air pollutants such as dust, allergens, smoke, pollen, bacteria, and viruses. This is especially beneficial for allergy sufferers because ionized air does not contain any allergens. The other benefit of ionized air is that it is usually rich with negative ions. Negative ions have a lot of beneficial effects on our bodies, so the more negative ions we can inhale, the better it is for us.

In order to better understand the answer, I am going to go more in-depth about ionized air in the next few paragraphs. Stick around if you want to learn more about ionized air and the different aspects around it.

What is ionized air

Negative ions are the source of air ionization. In nature, we can find the largest amount of negative ions around caves, in forests, near waterfalls, and during thunderstorms. Negative ions can also be artificially made by devices called air ionizers or negative ion generators. 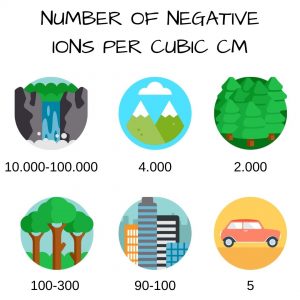 Air ionizers release negative ions in the air, which neutralize all of the harmful airborne particles. This process of negative ions removing air pollutants from the air is called air ionization. So we can say that ionized air is basically air that was cleaned by the process of ionization, through the use of negative ions. The cool thing about negative ions is that they can remove harmful particles of all sizes, even as small as 0.001 microns (most other air purifiers struggle with these small particles). Consequently, they can truly clean the air effectively.

In my other posts, I have already written about how an air ionizer works, so I will not be spending too much time on that here. The simplest explanation: negative ions act like a magnet, attaching themselves to air pollutants and then bringing them down with the help of gravity. Once these harmful particles are one the ground, they stay there until we clean them with a cloth or vacuum them. What remains is clean air, which we often call ionized air.

The opposite also holds true. If there are not enough negative ions to remove all of the harmful particles, then only a smaller portion of air will be successfully ionized.

So while negative ions are effective at removing all particles and creating ionized air, the amount of this ionized air depends on the number of negative ions that the air ionizer generates.

Next, we are going to take a closer look at the benefits of ionized air and why it is good for you. Assuming that there are enough negative ions left in the air, you can experience the following benefits:

Can ionized air be bad for you?

While we have already established that ionized air is good for you, there is an exception to that statement. Yes, ionized air can be bad for you if ozone is present in the air. Let me explain.

The majority of negative ion generators release ozone into the air, as a byproduct of generating negative ions. I have already written a lot on ozone, but all you need to know for now is that ozone is detrimental to your health. Since ozone irritates the lungs, it is especially dangerous to anyone with respiratory issues. Different air ionizers produce a different amount of ozone, but even the smallest amount is harmful.

While negative ions do remove all pollutants from the air, they do not remove ozone (they actually create it). Ozone does disappear on its own, usually between 30 minutes and 4 hours after turning off the negative ion generator. However, if we are in the room while ozone is still there, we can experience lung irritations.

With this information, we can now answer another really common that many people have  – “why is ionized air bad for you?”. In short, ionized air is bad for you because of the harmful effects which ozone has on your respiratory system. This entirely depends on one factor – if the air ionizer produces ozone or not. If a negative ion generator does not produce any ozone, then it is not bad for you.

Putting in all together

Throughout this thread, you have learned that negative ions and their superior cleaning capabilities are the main reasons behind the answer as to why ionized air is good for you. This is especially beneficial for allergy sufferers, as ionized air provides a huge relief from all the symptoms associated with allergies. Air ionizers, sometimes called negative ion generators, are air purifiers that make these negative ions. Negative ions are not just harmless but are also beneficial to the human body.

That being said, ionized air can be bad for you in some cases. If negative ions are mixed with ozone, then the otherwise clean air can become harmful to breathe. This is due to the negative effects that ozone has on our respiratory system, which triggers lung irritation and can lead up to some serious complications!

Therefore it is best to look for an air ionizer that does not emit any ozone! While the majority of them do release ozone, there are some on the market that do not. Always look at ozone production levels -the more you move to the upper limit of 0.05 ppm of ozone concentration, the worse the effect.